Paul talks about painting Freud’s book, The Interpretation of Dreams, in conversation with Mike Wolfe.

Mike Wolfe: What we’re looking at in this online exhibition are pages from Freud’s book The Interpretation of Dreams which you’ve painted?

Paul: Encaustic’s a method of painting with hot wax. I applied the molten wax to the paper with a brush, the wax then solidifies very quickly preserving the stroke of the brush. So the surface bears the record of its own making, it’s a memorial of sorts.

For a few paintings I added black pigment to the wax so the surface gives off a wonderful diffused light. That’s a bit difficult to see in this exhibition – you get a better view of the surface in this photograph taken at an angle to the paper surface. 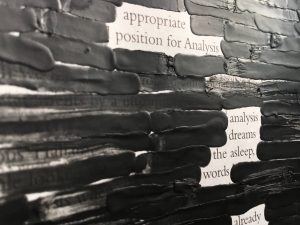 Paul: For this show I decided each painting would be shown alongside an enlarged detail of its surface. You can see a lot in the enlarged detail – ridges of paint, traces of words, even the fibres that make up the paper…

Mike: There’s lots of editions of Freud’s book. Which one did you use?

Paul: I used two. The 1976 edition prepared by Angela Richards for the Pelican Freud Library. This was a very popular book, maybe the one through which most general readers know Freud’s work, especially here in the UK. I used an old, second-hand copy. The pages are discoloured.

The other edition of Freud’s book used was prepared in 2005 by Simon Morris (Leeds University), published by Information as Material. The paper of Morris’ book, by contrast, is a bright white.

Mike: Would you say something more about Morris’ edition of Freud’s The Interpretation of Dreams. I had a look at it and one thing that’s clear is you can’t read it – it’s total gobbledygook!

Paul: Yes it is gobbledygook! This is because Morris passed all quarter of a million words of Freud’s book through an algorithm which randomised the order of Freud’s words.

As you say, the result is largely – though not completely – nonsense. Because I painted several of Morris’ pages using a thinned white paint or translucent wax you’re still able to read the gobbledygook underneath.

Mike: Why did Simon Morris do that?

Paul: He says something about wanting to turn Freud’s book into a dreamlike version of itself – he’s posted a video on YouTube about this and his other Freud projects.

But what needs to be emphasised here is that after his manuscript had passed through the algorithm, Morris had it printed so the book’s dimensions, fonts, chapter divisions and paragraph lengths were the same as Angela Richard’s 1976 Pelican edition. Morris even had his book printed on equivalent paper stocks. This means that it’s very easy to confuse the two editions.

Mike: On many pages you paint over Freud’s text so it’s difficult or no longer possible to read.

Paul: Yes, the only pages of Freud’s book I didn’t paint are those without words, the two blank pages – one taken from each edition – which end this exhibition. However, if you look closely at those two blank pages you can see Freud’s words seep through from the other side of the page. So Freud has the last word after all, albeit reversed.

But yes, you’re right. Some pages look as though Freud’s text has been redacted. However, I don’t think there’s a page on which every single word has been painted over.

There’s no totally black page – no mourning page – like the one Lawrence Sterne included in his novel, Tristram Shandy.

Mike: When did you make these paintings?

Paul: I painted the The Interpretation of Dreams in 2018, although it wasn’t until last November – during the second national lockdown – that I began thinking about exhibiting them. I’m showing them here for the first time, about ten, arranged more or less chronologically.

Mike: So what’s next?

Paul: We’ve just finished the poster for the exhibition – it’s great to see the painting The Forgetting reproduced so large. Now I’m working with a graphic designer to prepare a portfolio of editioned prints of these paintings. They make attractive gifts for therapists! 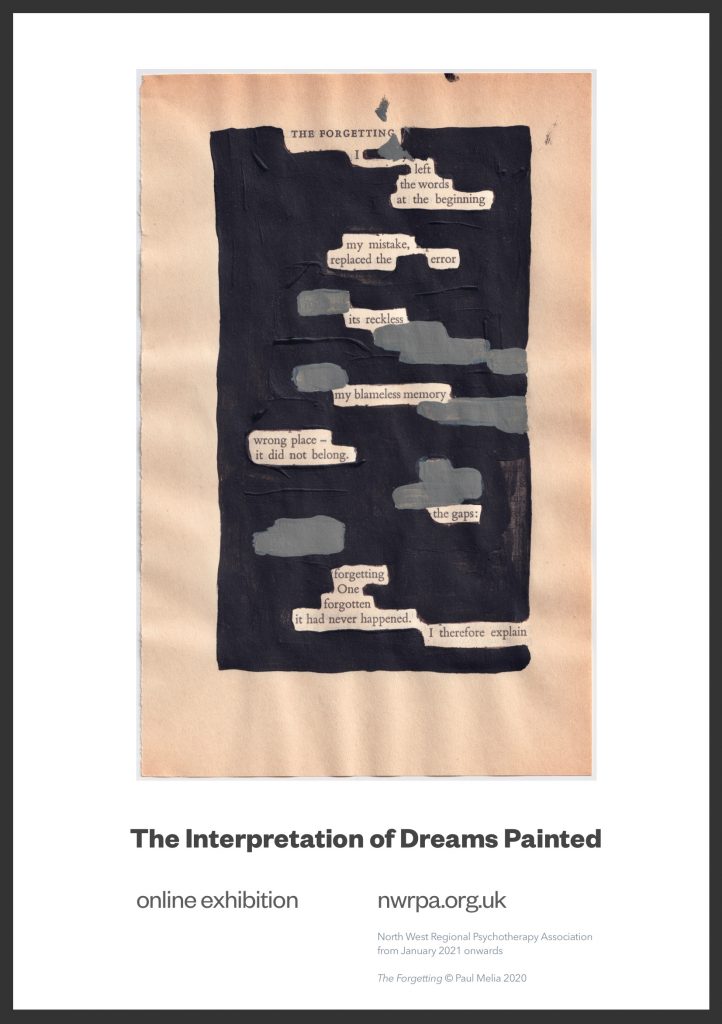